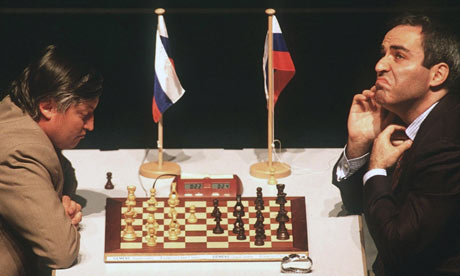 If you needed any further encouragement to attend the 50 year anniversary edition of the Reykjavik Open, now you got it! The man himself, the 13th World Champion, Garry Kasparov will visit Iceland and the tournament on the 4th-6th of March 2014.

The tournament will start on the 4th of March so we can expect Garry to be in attendance when the tournament gets under way.

Just over a month ago Kasparov announced his candidacy for FIDE president. In 2014 we can therefore expect Garry to be campaigning and visiting a number of countries. His visit to Iceland will be most welcomed by this chess loving nation and Garry is no stranger to Iceland having been here a number of times before, most notably for the 1988 World Cup and in 2004 he met a then young prodigy but now a World Champion by the name of Magnus Carlsen.

At this time it’s not clear if Kasparov will be moving some pieces while in Iceland but organisers are very keen to have some blitz event but we’ll keep you posted if anything happens in that regard.

In any case don’t miss your chance to see and possible meet one of the most popular and celebrated chess players of all time!